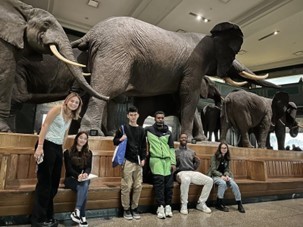 LAWRENCE, NEW YORK (NOVEMBER 2022)—A group of 40 students from Lawrence High School recently visited the Museum of Natural History to explore the exhibits.

“Students had a great time touring the Museum of Natural History,” said Dr. Jennifer Lagnado-Papp, Principal of Lawrence High School. “Field trips are always an exciting memory for all of our students, it allows them to develop an enjoyment of learning while using all their cognitive learning skills such as visual, auditory, and kinesthetic to learn and absorb information.”

Students in the Spanish class led by Jeannine Cammarata visited the Mexican and Central American exhibits in the Hall of Human Origins and the Cultural Halls where they were able to explore the evolutionary story of human evolution and the different cultures of Asia, Africa, North and South American, and the Pacific. The art students led by Janet Ganes sketched animals from the dioramas and viewed the insect macro photographs by Levon Biss at the Extinct and Endangered: Insects in Peril exhibit. Students learned all about the insects that impacted the planet

One of the highlights of the trip was witnessing the 94-foot-long, 21,000-pound model of a blue whale that was suspended from the ceiling in the Milstein Family Hall of Ocean Life.

To learn more about Lawrence Union Free School District and its schools, visit the District website at https://www.lawrence.org/.